Your Guide to Romeo & Juliet

From star-crossed lovers and a masquerade ball to dueling enemies and sleeping potions, here is your guide to Shakespeare’s beloved tale, Romeo & Juliet! 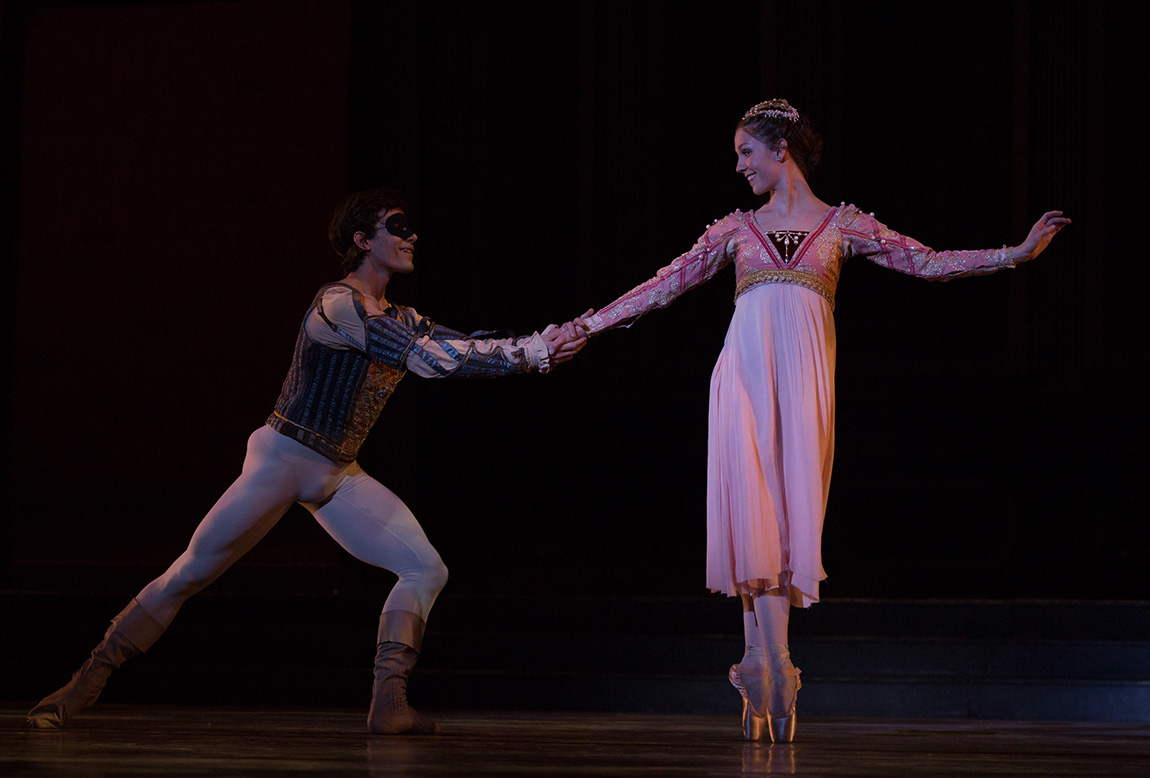 The Town Square – At dawn in the streets of fair Verona, Romeo, the son of Lord and Lady Montague, is following the aloof beauty, Rosalind, hoping she will cast a favorable eye on him. Vendors fill the square and those faithful to the House of Capulet begin to tease and taunt those faithful to the House of Montague which turns into an all-out brawl. The Prince of Verona is forced to intervene, ordering an end to the fighting.

In front of the House of Capulet – As guests are arriving at the Capulet Ball, Mercutio and Benvolio, Romeo’s friends, try to distract the lovelorn Romeo from thoughts of Rosalind by coaxing him into crashing the Capulet party incognito. Donning masks and capes, they enter the Capulet house unrecognized.

The Capulet Ball – The elegant lords and ladies of Verona are enjoying the festivities. Juliet enters to greet her parents and is put on the arm of Paris. Romeo and Juliet notice each other for the first time and are instantly enamored by each other. Tybalt, aware that it is Romeo behind the mask, orders him to leave at once. Lord Capulet intervenes and welcomes Romeo as a guest in his home.

Juliet’s Balcony – Unable to sleep as her mind stirs with thoughts of her newfound love, Juliet wanders onto her balcony to dream of Romeo. Longing to see Juliet once again, Romeo appears in the garden beneath her balcony. As the night comes to a close, they proclaim their love for one another, reluctantly bidding goodnight.

The Market Square – The day after the Capulet Ball, the square is alive. While Mercutio and Benvolio dance with the townspeople, Romeo daydreams of Juliet. Juliet’s nurse finds Romeo in the crowd and gives him a letter from Juliet. The letter requests that Romeo meet Juliet in secret at Friar Laurence’s Chapel so that they may be married.

The Chapel – Romeo and Juliet are secretly married by Friar Laurence, who hopes that their union will end the feud between the Montagues and Capulets.

The Market Square – Tybalt enters the square looking for Romeo to exact revenge for disrupting the Ball. Romeo refuses to fight, unable to tell Tybalt that they are now in fact cousins by marriage. Tybalt insults Romeo’s cowardice and Mercutio steps in to defend his friend’s honor. They fight, and as Romeo tries to stop them, Tybalt fatally wounds Mercutio. Romeo avenges his friend’s death in a vicious fight resulting in Tybalt’s death. 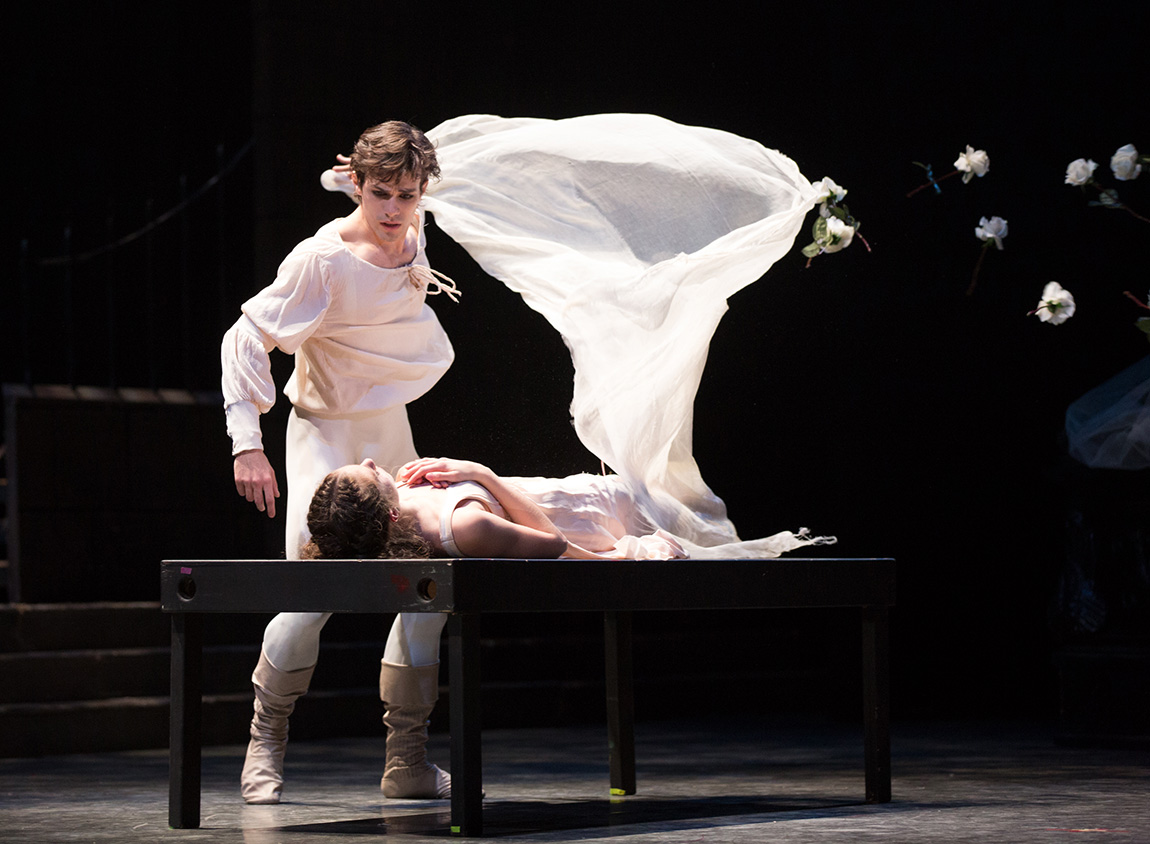 Juliet’s Bedroom – Having been exiled from Verona, Romeo pays one last visit to Juliet to confess his eternal love and says goodbye. Juliet is reluctant to be separated from her new husband but accepts the fact that the only way for Romeo to survive is to flee Verona.

The Chapel – Juliet’s parents insist that she marry Paris. Juliet cannot handle the thought of being wed to him, for Romeo is her one true love. She begs Friar Laurence for help. He devises a plan and gives her a vial of sleeping potion that will make her fall into a death-like sleep. Then, believing her to be dead, Juliet’s parents will place her body in the family crypt. Meanwhile, Romeo will receive a message from Friar Laurence, which will instruct him to return in the dark of night and rescue her from Verona and her dreaded fate.

Juliet’s Bedroom – Unaware of her plan, Juliet’s parents believe she has come to her senses in her decision to marry Paris. The next morning though, they find their daughter apparently lifeless.

The Capulet Family Crypt – Tragically, the Friar’s message never reaches Romeo, but instead, he hears the news of Juliet’s death from her nurse. Wanting to see her one last time, Romeo returns to Verona and sneaks into the Capulet family crypt. Believing her to be dead, Romeo cradles his wife’s lifeless body in his arms. Romeo decides he cannot live without his true love and kills himself. Juliet awakes to find Romeo dead; wrought with anguish, Juliet takes her own life, joining her lover in death. 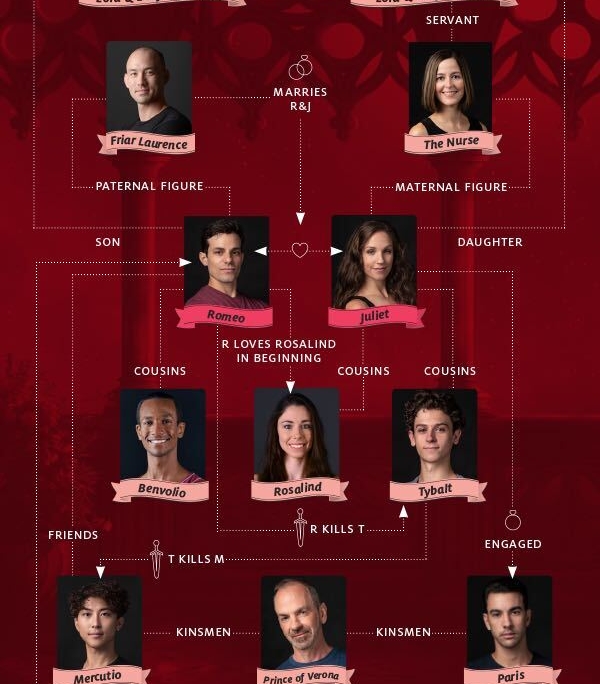 P.S. There is still time to experience the breath-taking beauty of Ballet Arizona’s Romeo & Juliet at Symphony Hall, February 10-13. Click here to get your tickets today!

Read ‘10 Things You Need To Know About Prokofiev’
The last comment and 2 other comment(s) need to be approved.
0 replies

The Choreographer Series: A Look at Balanchine
Scroll to top