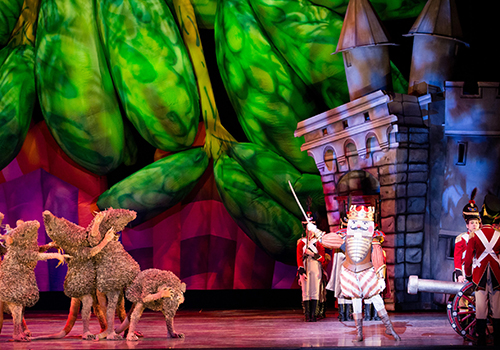 The Synopsis of “The Nutcracker”

Learn More of The History As Well

Herr Stahlbaum and his wife are giving a Christmas Party. Clara and Fritz, their children, greet the guests. The parents give toys to all the children. Suddenly, the mysterious Dr. Drosselmeyer arrives and entertains the children with his magical tricks and wind-up dolls.

Dr. Drosselmeyer brings a special gift for Clara – a wooden nutcracker. In a jealous fit, Fritz breaks it. Dr. Drosselmeyer quickly repairs it. The party ends, the guests leave, and the Stahlbaums retire for the night. Clara awakens as a mouse runs through her room. The clock strikes midnight. Suddenly, the room fills with giant mice who attack Clara. Life-sized toy soldiers, led by her valiant Nutcracker, come to her rescue. The Mouse King attacks the Nutcracker, but Clara hits him with her shoe and the Nutcracker wins the battle. After the battle, the Nutcracker is transformed into a handsome prince.

The Prince rewards Clara for her bravery by presenting her with a crown and introduces her to the Snow Queen and King who send them on their journey to the Land of the Sugar Plum Fairy in an enchanted sleigh.

The Sugar Plum Fairy welcomes Clara and the Prince to her kingdom. After the Prince tells of his battle with the Mouse King and how Clara bravely helped him to victory, the Sugar Plum Fairy invites them to a special celebration in their honor. They are entertained by delightful dances including Spanish Chocolate, Arabian Coffee, Chinese Tea and Russian Trepak, in addition to a shimmering performance by the Dew Drop Fairy and her Waltzing Flowers. The celebration ends with the Sugar Plum Fairy and her Cavalier dancing for the honored guests. Clara wakes from her
magical dream to find herself safely at home with her Nutcracker in her arms.

History of The Nutcracker–

For over 100 years, The Nutcracker has been an annual holiday tradition throughout the world. The story is based on two tales: The Nutcracker and the Mouse King by German author E.T.A. Hoffman and a French version of this tale, The Nutcracker of Nuremberg, written by Alexander Dumas Pere. In 1891, Peter Tchaikovsky was commissioned by Marius Petipa to write the score for The Nutcracker. Later, Petipa became ill, and his associate Lev Ivanov was invited to assist in the collaboration. In 1892, the first full-length ballet of The Nutcracker was debuted at the Maryinsky Theatre (now the Kirov) in St. Petersburg, Russia. Although very popular in Russia,
The Nutcracker was not presented outside of Russia until 1934, when Nicholas Sergeyev staged it at the Sadler’s Wells Theatre in England. In 1940, Ballet Russe de Monte Carlo debuted a shortened version of The Nutcracker in the United Sates. The U.S. had to wait until 1954 for a full-length version of the ballet, when Kirov-trained George Balanchine created a new staging, which has become the version of The Nutcracker most Americans have come to know and love. The popularity of annual Nutcracker productions were, in part, financially responsible for the creation and dramatic growth in the number of ballet companies across the United States and Canada in the 1970s and ’80s. This included Ballet Arizona’s founding in 1986, when this holiday classic became an annual tradition here in the Valley.

Now in its 34th season, Ballet Arizona is proud to present a $1.8 million production created specifically for the Company, involving more than 300 creative minds across two continents. The 260 costumes in The Nutcracker were created in 17 shops across America, out of more than 6,500 yards of fabric and more than 100,000 Austrian Swarovski crystals were used to create the sparkling snow scene. This massive production utilizes all of Ballet Arizona’s dancers who will perform several roles, making up different casts that alternate from show to show. During the run of The Nutcracker, Ballet Arizona dancers will use 250 pairs of pointe shoes. Ballet Arizona’s budget for pointe shoes for December alone is $25,000.

Get your tickets to Ballet Arizona’s Production of The Nutcracker Here!
The last comment and 8 other comment(s) need to be approved.
0 replies