Some stories say that at midnight, once a year, a clock’s hands reach the very top and pause just as Christmas Eve is turning into Christmas Day. Here is one tale of such a time… 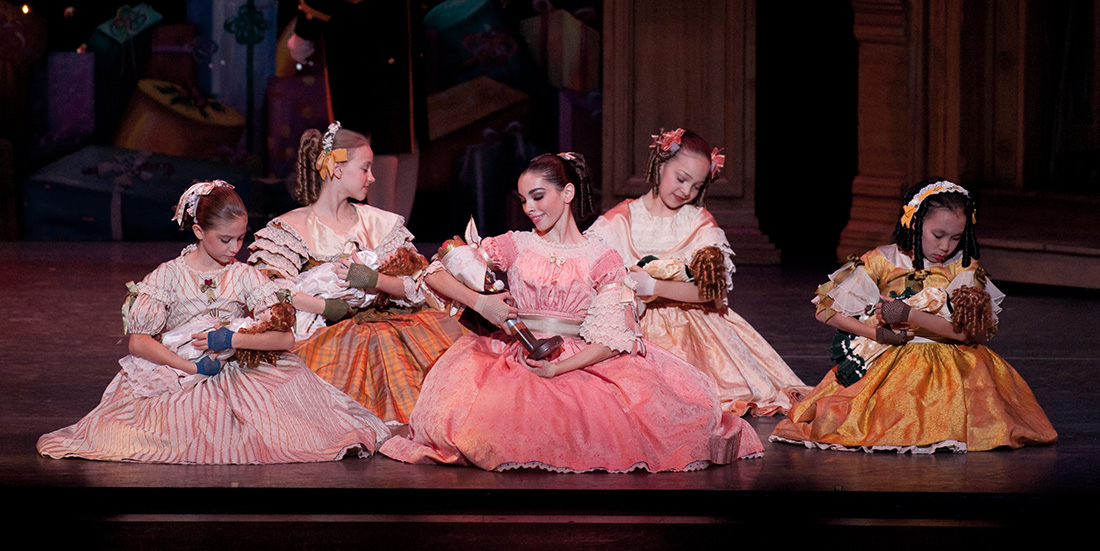 It’s Christmas Eve night, and Herr Von Stahlbaum and his wife are having a Christmas Party! Clara and Fritz, their children, are filled with excitement and begin the night dancing around the living room with all of their friends.

Just as the clock strikes nine, there is a burst of smoke and Clara’s godfather, the mysterious Dr. Drosselmeyer appears! He is a toymaker, an inventor, and a magician. Magic seems to follow him wherever he goes. The children surround him, jumping with joy and looking to see what he brought. The party guests “oohed and aahed” as Drosselmeyer’s life-size dolls dance around the room. After, he passes out toys for all the boys and girls, but leaves Clara last, handing her a special gift, a nutcracker doll in the shape of a soldier. Clara loves her new nutcracker, but in a jealous fit, Fritz, her younger brother snatches the doll away and brakes it. Clara is heartbroken, but Drosselmeyer picks up the nutcracker and repairs it with a magic wave of his hand.

As the party comes to an end, the Stahlbaums go upstairs to retire for the evening. Later that night, Clara goes downstairs to find her nutcracker doll and falls asleep on the sofa. Drosselmeyer suddenly appears, and like we said, magic always seems to follow him. 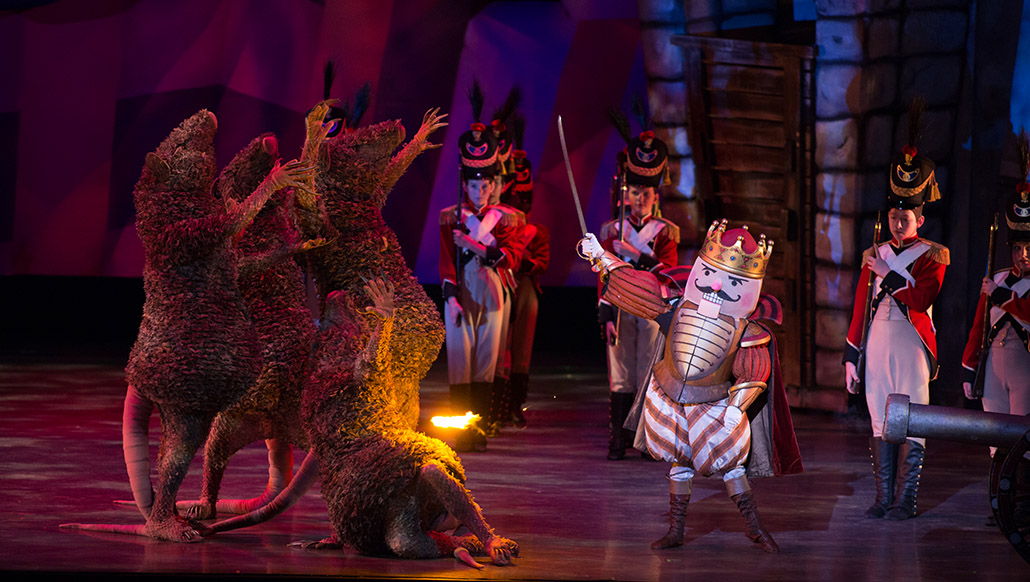 Clara awakens suddenly to a faint scratching sound, only to see mice running across the room and her beloved nutcracker gone! The clock strikes midnight and in the snap of a finger, her family’s living room is transformed. Mice fill the room led by the ginormous Mouse King. Next, life-sized toy soldiers come running through led by Clara’s valiant Nutcracker, who has come to her rescue. The Mouse King attacks the Nutcracker, but Clara hits him with her shoe and the Nutcracker wins the battle. As the mice drag their fallen king away, the Nutcracker is transformed into a handsome prince!

The Prince rewards Clara for her bravery and presents her with a crown. He  introduces Clara to the Snow Queen and King, who send them on their journey, in an enchanted sleigh, to the Land of Sweets to find the Sugar Plum Fairy.

Clara and the Prince, enter the Land of the Sweets to find the Sugar Plum Fairy dancing among angels. They are welcomed to the kingdom and the Prince tells of his battle with the Mouse King and how Clara bravely helped him to victory. The Sugar Plum Fairy invites them to a special celebration in their honor. They are entertained with delightful dances by Spanish Chocolate, Arabian Coffee, Chinese Tea, Swirling Marzipan, leaping Russian Trepak, and a shimmering performance by the Dew Drop Fairy and her Waltzing Flowers. The celebration ends with the Sugar Plum Fairy and her Cavalier dancing for the honored guests.

As the magic night swirls around Clara, she suddenly finds herself back home, on that very same sofa with the nutcracker doll in her arms, wondering if that incredible adventure had just been a dream! 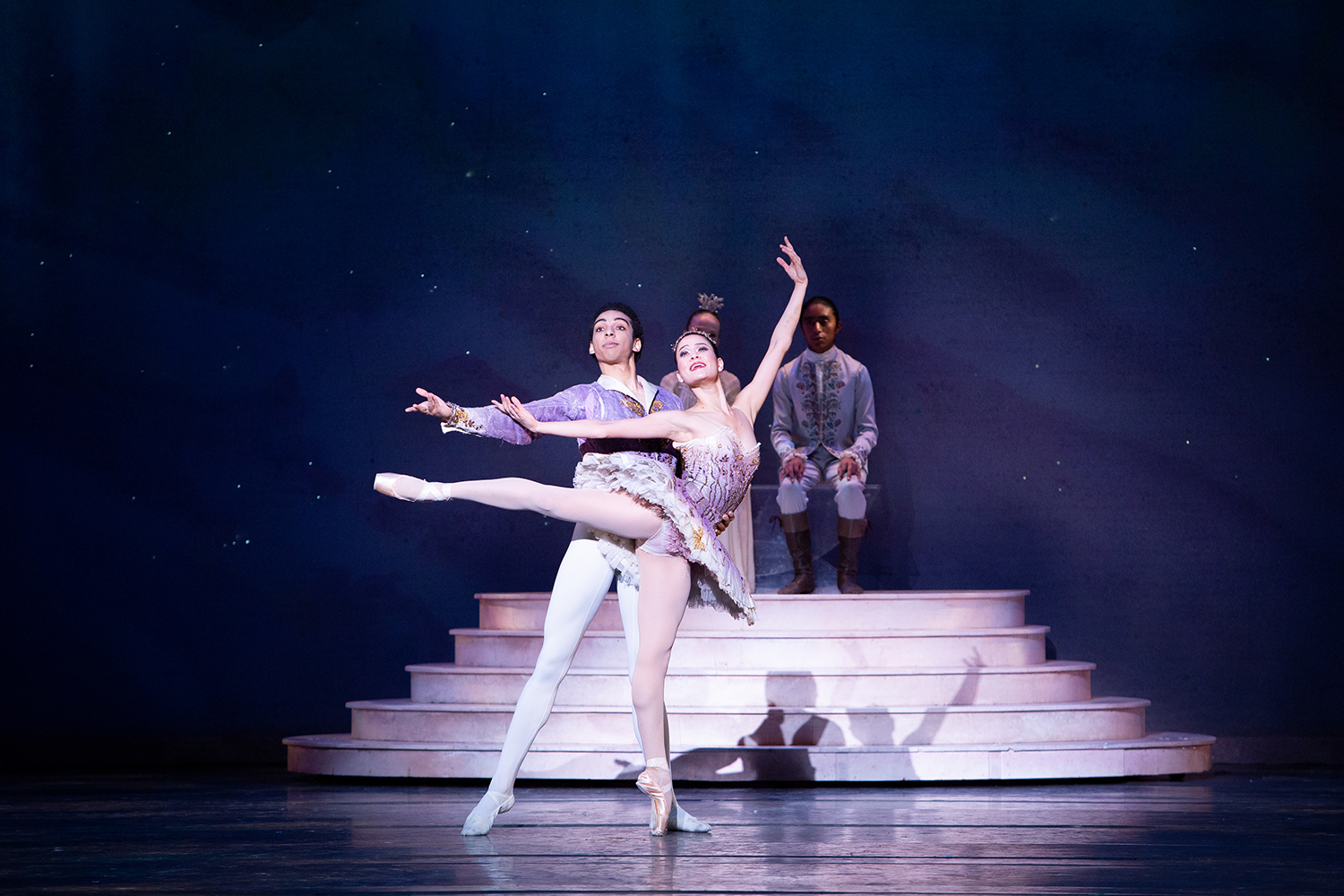 P.S. There is still time to get your tickets to Ballet Arizona’s critically-acclaimed, The Nutcracker, December 10-24, 2021 at Symphony Hall. Click here to get yours today!

Nutcracker Suite Digital Performance
The last comment and 1 other comment(s) need to be approved.
1 reply

The Nutcracker: The World’s Most Popular Ballet