It was almost as though Fabio was destined to be a costume designer. Growing up in the small town of Malcesine, Italy, he spent a lot of his time with his mother, who had previously owned a clothing store. This sparked a passion for him. He began playing with the clothes from her store, used one of her old knitting machines to make sweaters, and would even make outfits for his sister’s dolls. After finishing high school, he attended fashion school in Milan and shortly after, began working for designers. He then switched gears completely, leaving behind the fashion world and moved to England where he attended a Rudolf Steiner school. After three years, he went to Hamburg, Germany to attend music school. While there, he was doing a production of The Fairy Queen by Henry Purcell, but there was a problem, no costumes! At the time, Toblini had vowed to not touch clothes again but in a brief moment, he changed his mind and he hasn’t turned back since! A few years later, after that school production, he visited New York, met the love of his life and never left! He got a job at a costume shop to pay the rent and slowly began assisting designers. Over the course of his career, he has designed 17 musicals, 48 plays, 17 operas, and 6 ballets, 5 of which have been for Ballet Arizona. 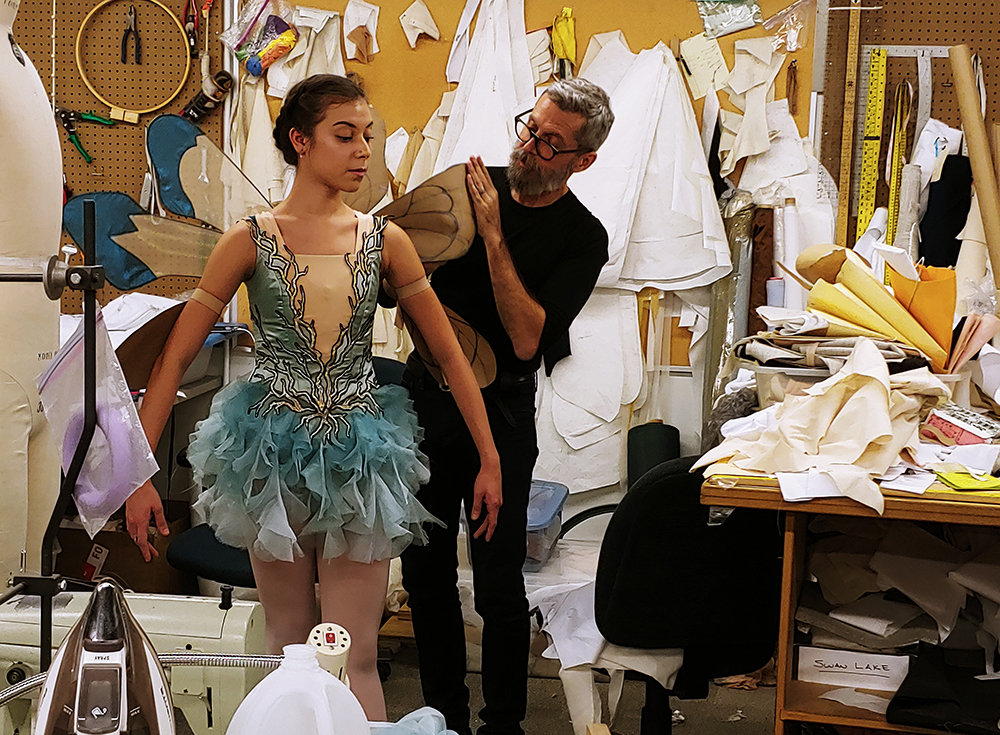 Can you share your inspiration behind the costumes for A Midsummer Night’s Dream?

I always work very closely with Ib. He pointed out Venetian painter, Giovanni Battista Tiepolo’s color palette which is very specific, a lot of pastels, very 18th century. But I get curious, is it only Tiepolo that Ib is inspired by or is he also interested in that whole period? It’s funny because when you look at Tiepolo’s work, you can’t really find any clothes. It is all fantasy, angels and goddesses that are draped in fabrics. So I decided to embrace that entire period and all of those silhouettes. But what I could take away from the Tiepolo reference, other than his color palette, was the playfulness and mythological aspect of his work. I really tried to keep that playful feel in all of the costumes.

For A Midsummer Night’s Dream, Shakespeare introduces three very different worlds, so I wanted to create a look for each one of those that would make them very distinctive, especially when those worlds collide. The Athenians, or the human world, will have the traditional 18th century fashion statements. For the ladies, it’s a very tight corseted fit for the upper body. The corset is very flat and is meant to push everything up and it’s also about those wide necklines. They also had panniers, which was the padding for their skirts and they were meant to extend the skirts out to the side for that ‘poof’. For the men, they have a suit called the justaucorps, which is a knee-length coat with a very specific shape that wings out and is worn with breeches.

In the fairy world, the costumes are more fantastical and organic. For Titania, the queen of the fairies, I proposed to Ib to make her as simple as possible. I wanted her to feel ethereal and light, so we created a chiffon dress that is skin-toned and sparkles a little, to create an aura around her when she dances. The women’s fairy corps was really interesting. Ib said he wanted his fairies to feel like energy and movement, and I immediately thought, “we need to have wings!” It’s such iconic imagery and I really wanted to keep that classic idea of a fairy for the audience but still be bold. Their costumes have embroidery and I initially thought to create bolts of lightning. But as I was making them, the lines started softening, and I am not sure what it is now. When creating costumes, I like abstracting images, so people can see different things for themselves. For Oberon’s men, I was inspired by ancient and medieval armor, it’s almost animalistic. The story really stems from this fight between Titania and Oberon, giving them this human aspect, I felt his men should also feel like soldiers and not just fairies. 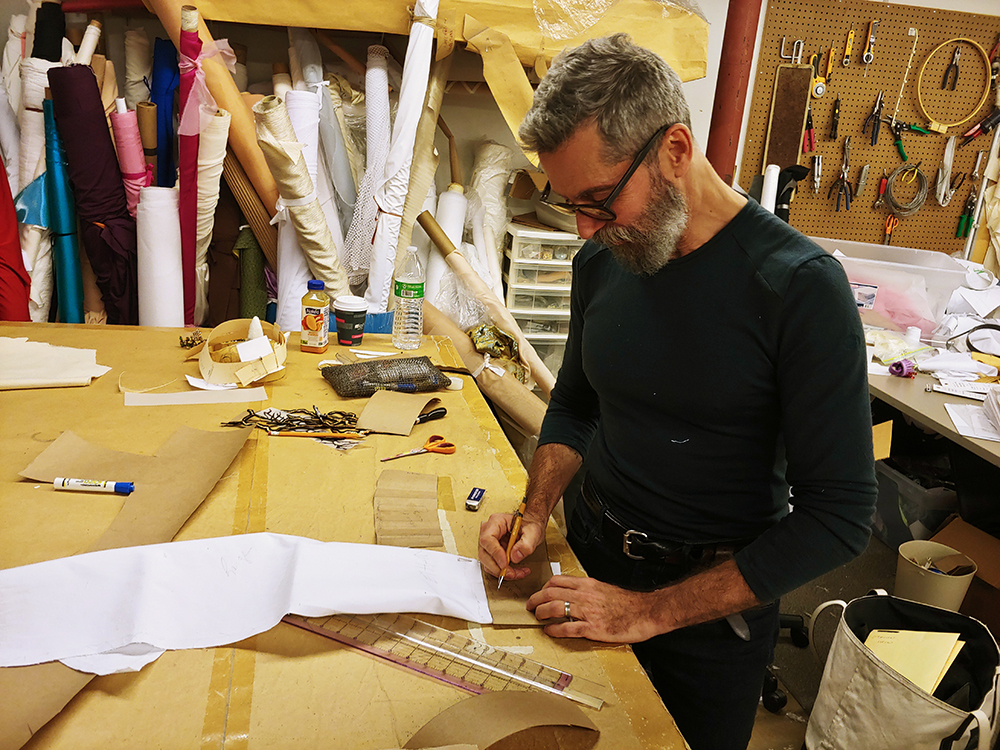 Outside of the dancing and the sets, the costumes need to be able to tell a story as well. Can you tell us what it’s like to create an entire production from scratch?

First, I always like to read the piece of literature, or in this case, watch the ballet and listen to the music. I watched Ballet Arizona’s production of A Midsummer Night’s Dream from a decade ago to get a feel of Ib’s choreography. But for costumes, it’s not just designing the clothes, I am creating a visual for this character. So I have to ask myself, who is Oberon? Who is Hippolyta? Ultimately what they wear is just a byproduct of who they are, but I have to create who they are and that is what designing costumes really means.

Back to my process though, I always start with research. Tiepolo was the first indication that Ib gave me, so I began looking for visual references to share with him to help create some sort of direction. With everything I do, I work extensively with the directors. Ib is especially hands-on. He is so specific about what he does and does not like. But we meet and talk through all of the characters and how Ib sees each of them. It is in those moments that I get all of the hints. I mentioned Hippolyta, well who is she? She is a queen, she is a slave, she has been captured, and now she is going to get married. If you look at the first few verses of the play, you have Theseus saying, and I am paraphrasing, “Oh don’t worry Hippolyta, I’ve killed all your family and all your people, but don’t worry because in a couple of weeks, I am going to marry you with great pomp, so be happy.” Um okay, so how’s that working for her? I think the Hippolyta I created is quite strange, but I wanted to show that because her background and circumstances are strange. For Act I, I made her exotic but without really knowing where she came from because I didn’t want her to fit, I wanted her to have her own strong look. And then in Act II, she is getting married and going to be the queen, so she needs a beautiful dress. For that, I was inspired by Queen Elizabeth II and a dress she had worn in the 1950’s.  But those are the things you have to think about as you create and design characters and you do it for every single one.

After all of the research, then I begin sketching and see what interests the director. Sometimes you get it right away, other times you go through multiple stages. It starts in black and white, using a pencil and paper and once we have established the shapes then I will introduce color. I like to work with Photoshop when I paint because I can just play with a bunch of colors, it has definitely made me bolder and more daring as a designer.

Once the sketches are ready, it’s time to start choosing all of the fabrics and that is a process. For a ballet like this, with so many characters and how different they all are to each other, you need different types of fabric. For one costume alone, even if it’s monochromatic, you can have up to ten types of fabric based on the silhouette. By the end of the search, I have bags and bags of fabric swatches, and I sort them out and begin looking at all of the possibilities for each of the sketches. Once I have some ideas, I send Ib what I am thinking, we talk through all of the options, and once a decision has been made, the ordering begins. It’s a very long, detailed process, especially if the fabric you want is no longer available, then it’s back to the drawing board. But if everything goes to plan with the fabrics you want, what comes next is all of the fittings and actual creation of the costumes. 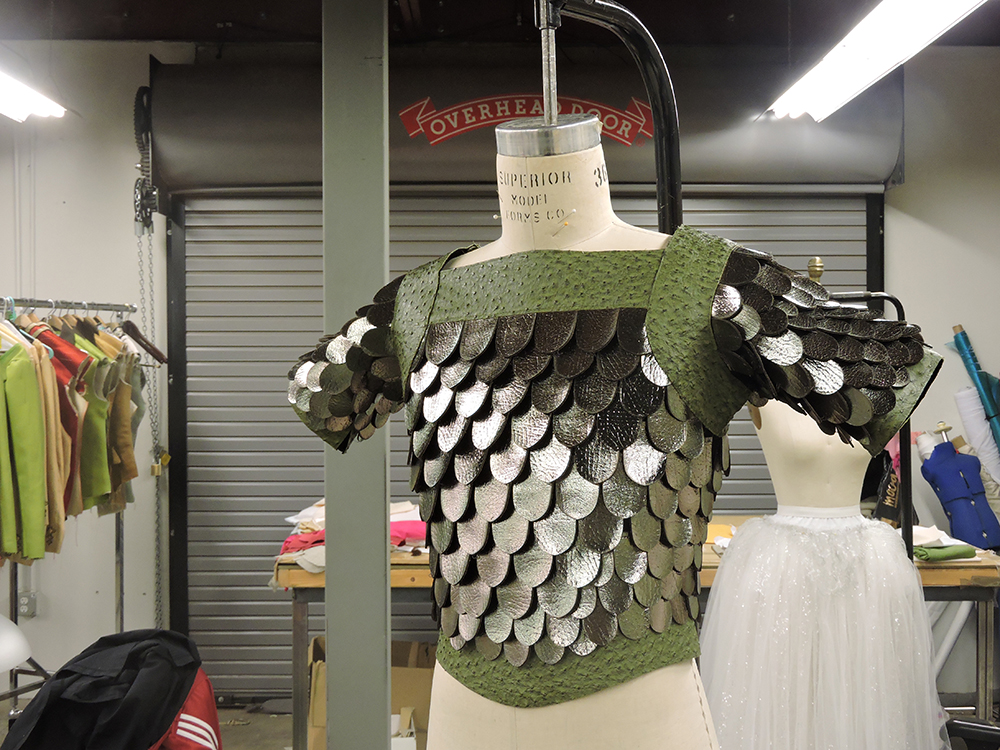 This isn’t the first time you have designed for a Shakespeare production. What is it like to take on these iconic works?

This is going to sound superficial, but it doesn’t really matter that it’s Shakespeare. Every production I design is special and unique in its own way. To be honest, talking about ballets specifically, I actually found The Firebird to be more of a daunting project than A Midsummer Night’s Dream.

However, I am really proud of a production of Shakespeare’s Hamlet that I designed for Darko Tresnjak at Hartford Stage. It was so intense and beautiful. It was period costuming, but minimal and yet luscious at the same time. I have also done a rock version of A Midsummer Night’s Dream for Director, Joe Dowling at The Guthrie Theatre. The fairies were so much fun, very scantily dressed!

But as a play itself, what I like about A Midsummer Night’s Dream is that it’s a meditation on free will. We as humans think we have all of this free will, and this play shows how guided we all are by our nature. Human nature is strong, so how much freedom do we actually have?

Click here to get your tickets to A Midsummer Night’s Dream!
0 replies