Cinderella: Around the World

It’s the classic Disney tale as old as time…or so you thought! Take a look at the many stories of Cinderella from around the world. 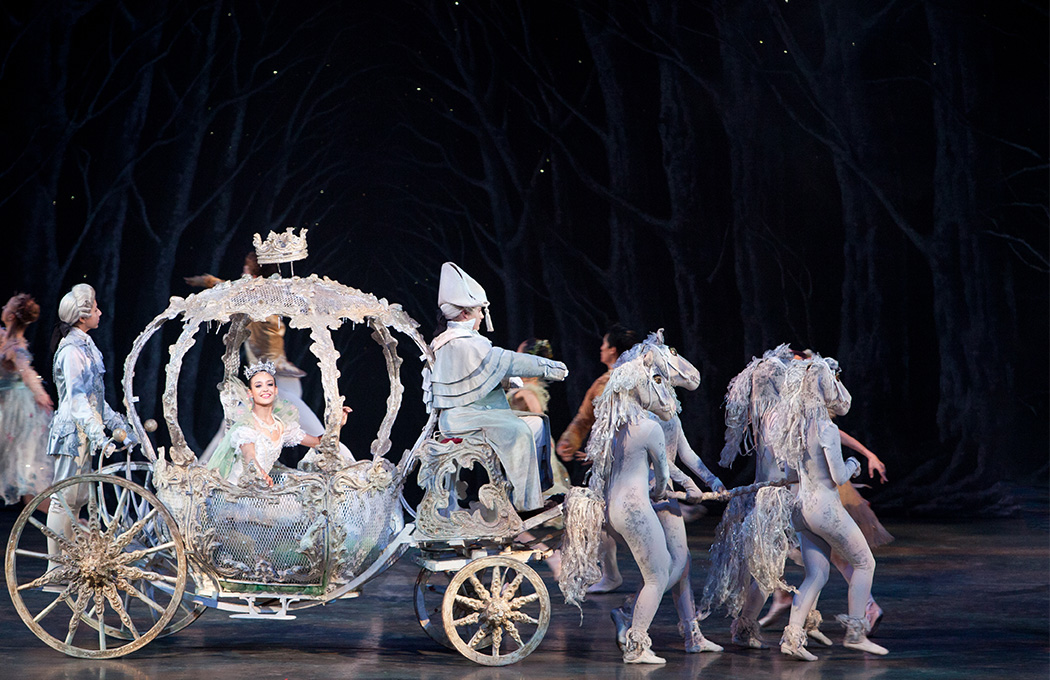 The first ever version of a Cinderella-like story dates back to ancient Greece during the sixth century BCE. The tale tells of a Greek courtesan named Rhodopis, who has one of her shoes stolen by an eagle. The eagle flies across the Mediterranean and drops the shoe in the lap of an Egyptian king, who takes this as a sign from the gods and goes on a search for the owner of the shoe. Once the king finds Rhodopis, he marries her, making her the queen of Egypt.

A darker version of Cinderella known as Ye-Xian was written between 618-907 AD during the T’ang Dynasty. It tells the story of a young girl named Ye Xian, whose mother and father have passed away, leaving her with an evil stepmother and a cruel stepsister. She befriends a big fish with golden eyes and scales, which turns out to be a guardian spirit sent to her by her mother from beyond the grave. The evil stepmother, is angered that Ye Xian has found happiness and in turn kills the fish and eats it for dinner. The day of the New Year Festival, Ye Xian is visited by fish’s spirit and granted a wish, turning her tattered clothes into a gown of sea-green silk. She attends the festival and is admired by everyone but makes a quick exit after seeing her cruel stepsister and accidentally leaves behind a green slipper. The slipper makes it way to a nearby king, who issues a search for the young maiden but is ultimately unsuccessful. Ye Xian attempts to retrieve her lost slipper but is caught in the act and assumed to be a thief. Brought before the king, she tells her life story and he invites her to marry him and live in his palace. Upset at losing her “servant,” Ye Xian’s evil stepmother forces her daughter into the same servitude as Ye Xian, but the daughter rebels and a fight ensues, causing their home to collapse, crushing and killing them both. Ye Xian, however, lives happily ever after! 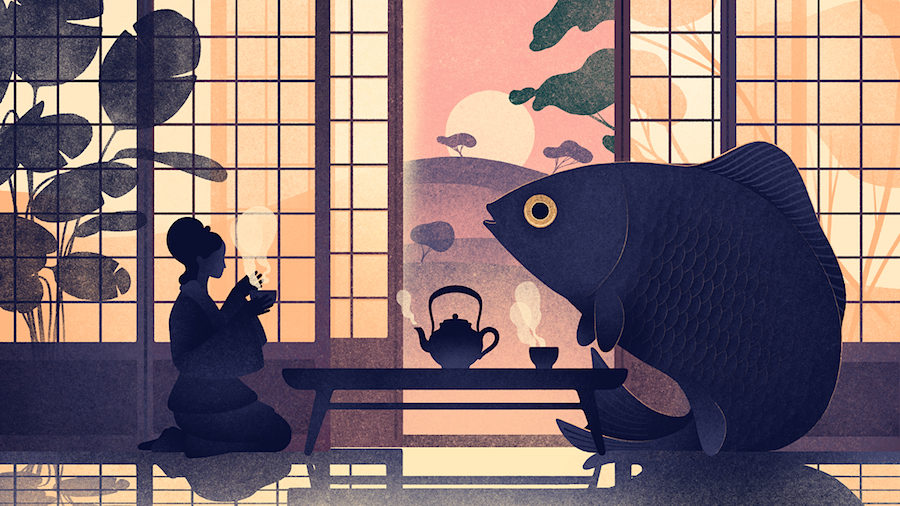 Featured in Giambattista Basile’s book of short stories, Il Pentamerone, published in 1634, is the tale of Cenetentola. This is the first version of Cinderella that bears the closest resemblance to the story we know today, but much like the Chinese version, Cenetentola has some dark twists and turns. It follows a young woman named Zezolla, who is encouraged by her governess to kill her stepmother…and she does. However things don’t go as planned and her governess becomes her new stepmother and she brings along her own six daughters! Zezolla is banished to the kitchen and given a new name, Cenerentola. Basile then adds a little magic to the story with fairies, a magical dress, a slipper, and a king for a perfect fairy tale ending.

Arguably the most well known Cinderella was written by Charles Perrault in 1697, named Cendrillon ou la petite pantoufle de verre. Part of what makes Perrault’s version so popular is his addition of the pumpkin that turns into a magical carriage, along with the mice turned into horses and a coachman, a fairy-godmother – wand and all , and of course the iconic glass slipper. Reading that, you’re probably already thinking Disney, and you’d be right! Perrault’s Cendrillon is the closest written tale that relates to the beloved 1950 film. 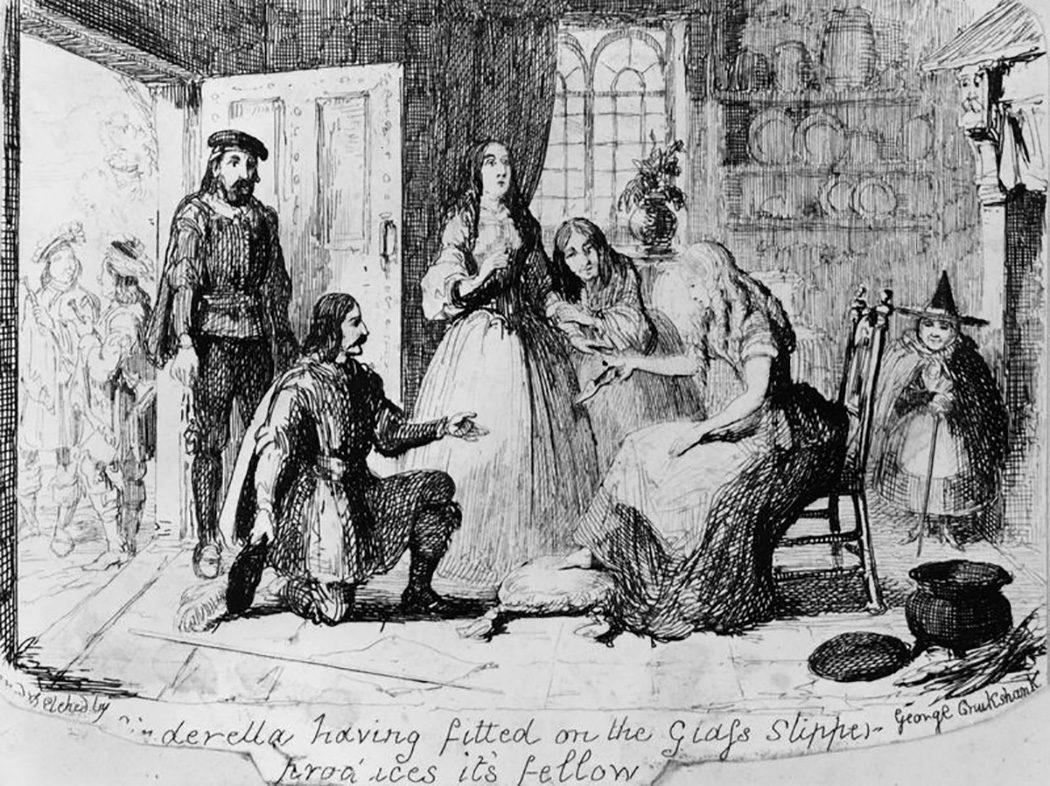 Circa 1830: Cinderella, having tried on the glass slipper, produces its fellow. Etching by George Cruikshank as an illustration for Grimm’s “Aschenputtel.” Photo by Hulton Archive/Getty Images.

The Brothers Grimm of course took a stab at the tale with Aschenputtel, and it wouldn’t be a Grimm fairy tale without a bit of darkness. It of course includes a poor, beautiful young woman, whose life is full of misfortune at the hands of an evil stepmother and two stepsisters. Later on in the story, when the prince is on the hunt for his mysterious woman with only a slipper for a clue, the stepmother advises one of her daughters to cut off her toes and the other to cut off part of her heel, in order to make the slipper fit! Although the prince is fooled at first, he returns to inquire about Aschenputtel and it’s happily ever after, at least for them. The stepsisters on the other hand are not so lucky and are blinded by doves at the wedding of Aschenputtel and the prince, a punishment they must endure for the rest of their lives…very grim indeed!

Chinye is a Cinderella-esque West African folk tale and was written in 1994 by Nigerian author Obi Onyefulu. The main character, Chinye, is an unjustly oppressed orphan, by her stepmother and a stepsister, who is spoiled. Chinye ultimately finds fortune in her journey through a forest and shares her wealth with the rest of her village and they live happily ever after. 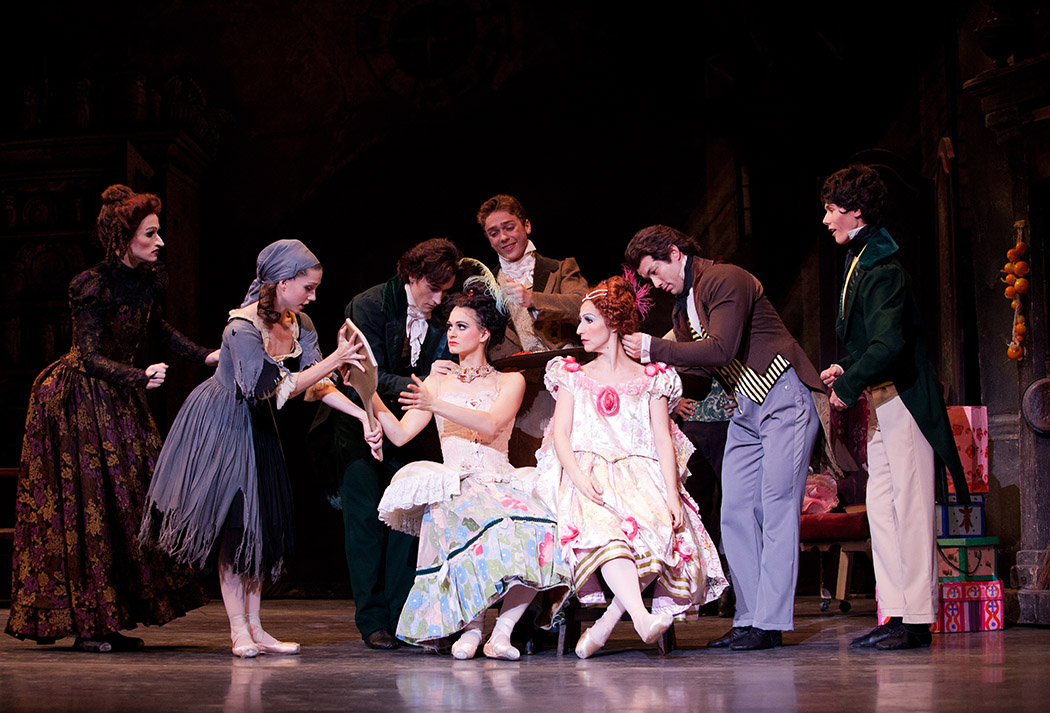 Why You Should Invest in Season Tickets