Choreographer and Ballet Arizona Company Dancer, Nayon Iovino is creating a new ballet for our upcoming production of Director’s Choice this September 26-29 at Orpheum Theatre in Downtown Phoenix. We sat down with Nayon to get an insiders look at Mambaz! 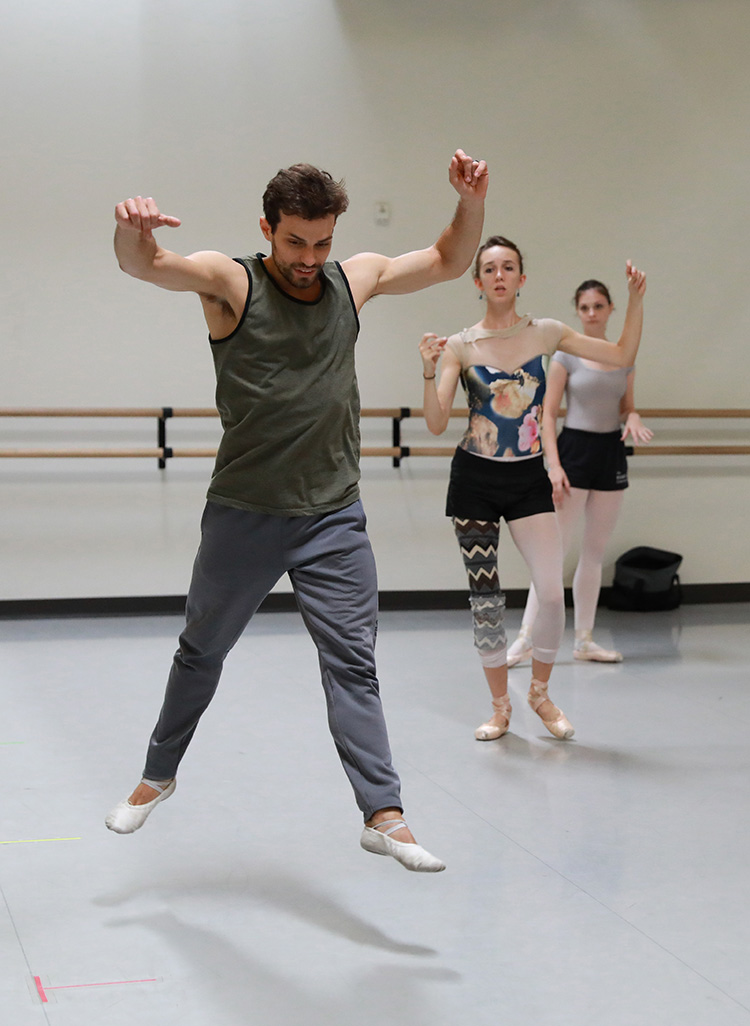 Nayon Iovino in rehearsal for his new work. Photo by Tzu-Chia Huang.

What was your inspiration for this Mambaz?

Ib is the inspiration! It is his 20th anniversary year with Ballet Arizona and I wanted to follow along that celebratory theme, so I decided to throw a party on the stage. I’m using the dancers I have to create a party scene with tables and chairs, they will have drinks in their hands, and they will be interacting with one another as though they are at an actual party, which will also create a bit of a story-line.

What can you tell us about the piece?

There are 8 different movements, it is kind of all over the place with the different dances. There is a mixture of group dances, a solo, and pas de deux. I really wanted to create a richness of interactions between the dancers. At the end of the piece, they all get together for a picture. I was thinking about Ballet Arizona’s galas, and how at the end of the night, all of the dancers are on the dance floor having fun together, and people are always taking pictures with one another. So that’s the idea, we are all at a party and everyone wants to get a photo together. I’m letting the dancers go wild there and be themselves in that moment. But overall, the whole piece is about 23 minutes… or it could be longer depending on how fast the band plays!

Speaking of the music, how did you end up choosing it?

Joseph Piirto, our technical director, was showing me some music from Pérez Prado, a Cuban musician, who is known for Mambo, and I was like, oh man, now that’s fun, because I want the piece to be full of energy. At first I had a piece by Igor Stravinsky, but if I had stayed with that, it would have just ended up being a ballet piece, and I wanted something more than that. When I heard Pérez, I knew instantly that I was going to go with that instead. The majority of the music is Cuban but there is one song that is not, I think it is from Venezuela.

On an even more exciting front, Mambaz is going to have live music! How did that happen?

Not that long ago, I went to The Nash in Downtown Phoenix, to watch a Cuban band play, and I really liked their stuff. The group is led by Josiel Perez, and he gets a bunch of musicians to play together. I reached out to him and asked what he thought about playing for us on stage for Director’s Choice, and he said he would really like to do that. So we brought them in to audition, because when I heard the band, it was not a full orchestra, and they would not have been able to play the songs I chose. But they came in and Ib gave it the go-ahead! They will be on stage with the dancers, making it even more of a party! 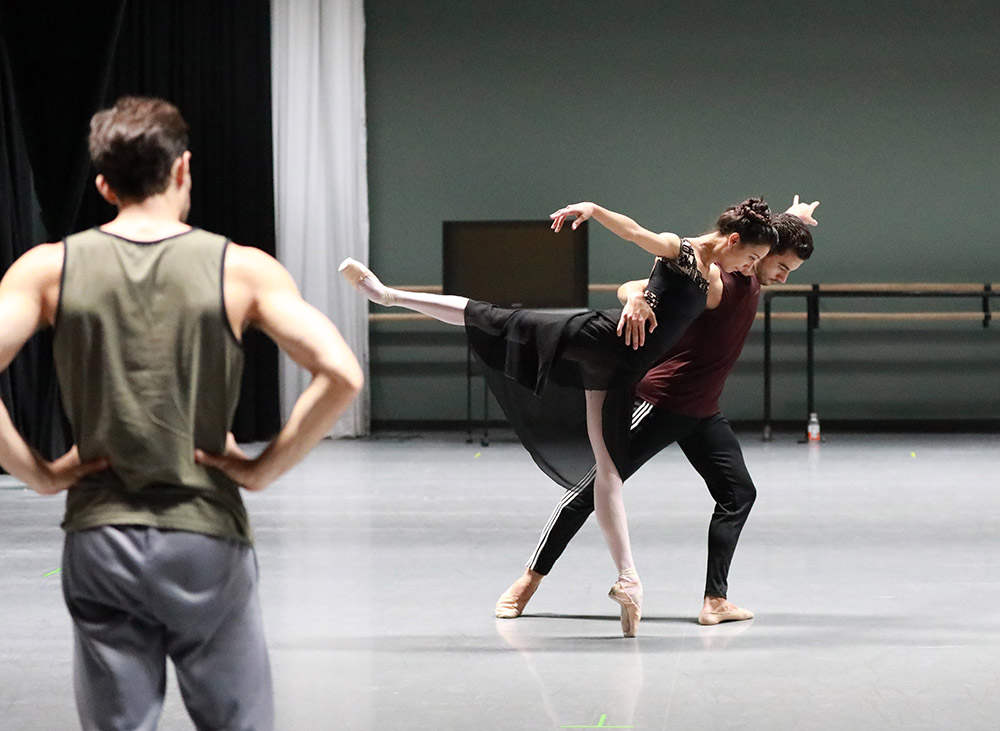 This work has a lot of moving pieces, and the choreography is very different to what our dancers have done before. What has been your greatest challenge?

The hardest thing is coaching…building a dancer takes time. For me, for example, I started realizing that to dance the way I am today, it took Ib, Maria, and Lisbet like five to six years, to get me here and I am still learning. So, I have a vision for how the movement should be and it might not get there, but it’s just working through this process of trying to get the dancers to see what I am seeing in my head. That’s really the hardest part.

Ib has been sitting in on your rehearsals, how has that been?

It’s different, this is is the first time he has been at pretty much all of my rehearsals, just watching, and I am like, oh god! I am definitely more stressed out, but it’s because I want to make sure it’s good.

Since attending the workshop at The New York Choreographic Institute, has your approach to choreographing changed at all?

At the workshop, the most exciting thing was talking with the dramaturg (a literary adviser for the performing arts) that we were paired with, and having her show me how the dramaturgy and dance have to go together. After working with her, I really understand it now. It’s funny, because Jillian (Nayon Iovino’s wife and fellow Ballet Arizona company dancer) has been my dramaturg this whole time and I never knew it. While choreographing, she will always stop me and be like “that doesn’t make sense, can you explain more?” and that forces me to make everything makes sense. 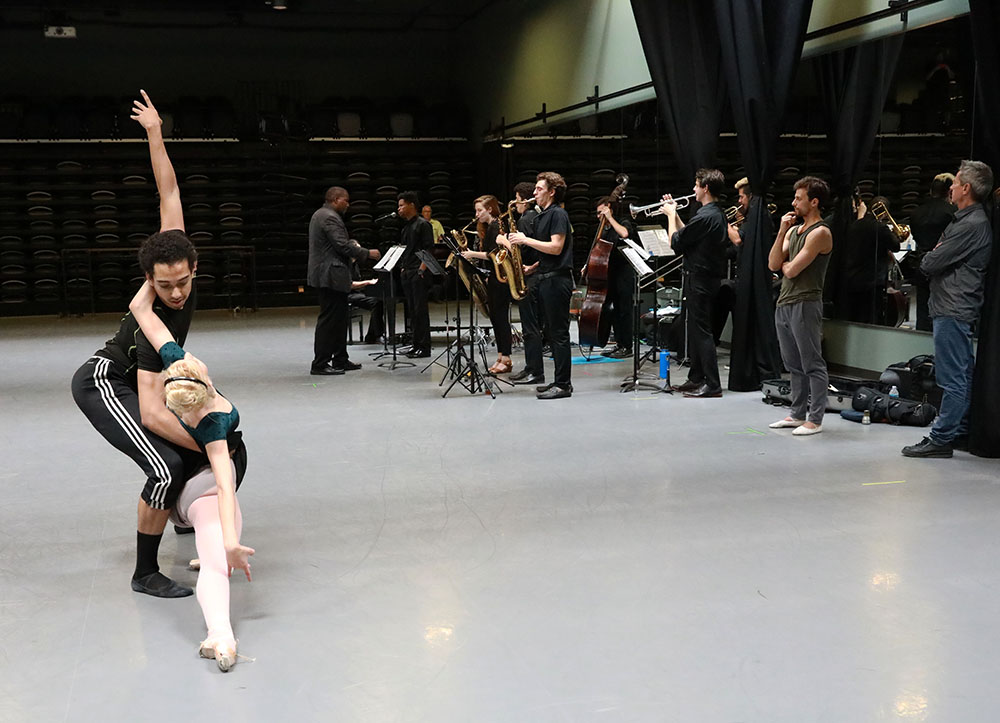 Watch the trailer for Director’s Choice!

Click here to get your tickets to Director’s Choice!
0 replies

10 Things You Need to Know About Napoli
Scroll to top