Behind-The-Scenes of A Midsummer Night’s Dream 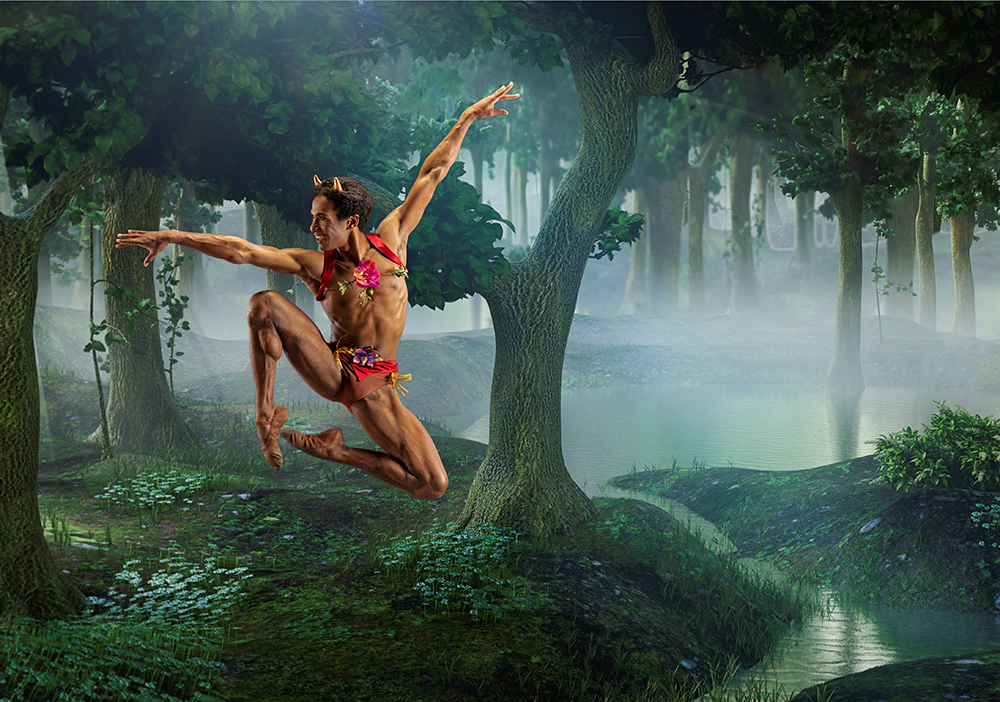 Ricardo Santos as Puck for A Midsummer Night’s Dream. Photo by Tim Fuller and design by P.S. Studios.

Tell us all about this new production of A Midsummer Night’s Dream. We want to learn more about how this came to life.

Well, we have never undertaken a project this massive in our own shops before, of which something I am very proud! To witness what we are able to do and build here is beyond anything I ever thought possible. We learned so much when we produced The Firebird premiere, and what we were capable of doing. We have not had to outsource any of it to New York or LA which is extraordinary. I must say I am humbled by the generosity of our board members who all made contributions to help fund the creation of the new costumes. They made this happen. I am also working with our production team on the set builds and designs, and to say we are able to create all of this within our very own walls is a ‘dream’ unto itself.

What is your inspiration for the costume design?

I had an idea of what time period I wanted and have been working very collaboratively with costume designer Fabio Toblini on my vision for the design. I was inspired by a Venetian painter named Giovanni Battista Tiepolo (1696-1770). His color palette is what inspired me. He is an amazing painter – such light. I believe his work is considered Rococo style. Is it Baroque or is it Rococo? That is the question. The ballet is not set during that same time period though – it is much more all over the place. We have been building about 85 costumes from scratch and started early last summer, but the clock is definitely ticking.

We have just started receiving drawings from Michael Korsch, our resident lighting designer and also the set designer for Midsummer. What we see so far in the design is an archway with layers of curtains that are covered with hanging Spanish moss. This provides a very translucent effect. The moss is hanging all over in such a way you can project on it from the front, the back, and from above. This will create a very textured look.

Some of the projections come from behind and many of the projections come from within the house. This means that the design becomes more 3-dimensional in nature and can create environments that could look like a palace, a ballroom, or even a forest. It gives more depth and texture. The lighting and projection provide a 3-dimensional scenic element that is different from the flat 2-dimensional scenery you usually see. That is the great benefit of embracing technology for these new productions.

And…I must warn everyone, the pink clam shell that Titania is found asleep in is actually changing. Our technical director is building something new and it will be a surprise!

How is the play different from the ballet?

I have not read the play in quite some time actually, since I premiered it originally in 2008. But I do remember that when I was in the studios choreographing this originally, I was practically holding the play in one hand while choreographing in the other. It is definitely following the story pretty straight. We haven’t done this in over ten years so I am sure we are going to change some things. I remember it being very straight forward, but not necessarily easy. I am staying very literal to the play for this. But of course, it is always up to the spectator to interpret what is reality and what is the fairy tale world, or rather, are they both one and the same?

With Mendelssohn’s Midsummer, he originally composed the famous overture but the eventual other pieces he created were incidental music. It would never stand alone as a full length ballet, so I had to find music from many different places and piece it together in a cohesive way. That took a long time and was a challenge to compile and arrange it together so that it made musical sense. I am using just the first movement from a very famous symphony which leads right into the wedding march, then it goes into the play – one famous piece of music after another.

I am very curious to see how this all comes together. What we produced 10 years ago might be all completely different because we have an entirely new company of dancers. Sometimes you have to adapt, compromise, and/or change your vision.

In The Spotlight: Gwen Hillis
Scroll to top